The next release candidate for 1.11.0 will be out very shortly, but I thought it best to post a brief update on the past week’s work as this week saw a concentrated effort on core optimization.

First we took another look at the use of arguments lists throughout the framework and found several more occurrences of it being accessed in an inefficient manner. Depending on the browser, accessing arguments in such a way that causes it to be allocated can be up to 80% slower and so it’s really good to have these all fixed.

The other piece of optimization work undertaken has been much more difficult. We’ve been looking into high frequency event handling, such as during touch dragging or mouse moving, with an eye towards managing memory better. Since SproutCore already does as much as possible to avoid touching the DOM, the largest issue that affects the “fluidity” of the user interface is JavaScript garbage collection. If the heap is filling up rapidly with unreferenced objects, the JavaScript engine will be forced to collect them more frequently and the act of collecting them will take longer. Since we have no control over when garbage collection occurs, for example we can’t prevent it from happening in the middle of a transition, the best we can do is to reduce its impact. So essentially, our goal is to not allocate any additional memory during high frequency events and our primary means to that goal is through shared Object re-use.

As I mentioned, this has been very difficult, but we’ve been steadily identifying and replacing Objects (hashes) and Arrays with single shared versions wherever possible. This includes some key high touch areas in SC.View’s layout code and SC.Event’s architecture. In fact, a major refactor of SC.Event was completed in order to re-use a single shared normalized event instance per event type. This means that whereas previously each event (e.g. touchmove) would allocate a new normalized SC.Event each time, it now re-uses just the one. The affect of all of this work is a slightly flatter memory profile with fewer and smaller saw-tooth garbage collection drops in it. It’s not perfect yet and it’s likely impossible to not allocate a bit of memory on each event, but some exciting progress is being made.

Lastly, a bit more internal debugging code was moved into debug-mode only. This means that the code will not be included in production builds, thus reducing the overall size of the production JavaScript by a tiny bit. A minor optimization, but one none-the-less.

We are pleased to announce the pre-release of SproutCore 1.11.0. Where version 1.10 drastically reduced the memory use of SproutCore, 1.11 goes even further to ferret out bottlenecks and improve the overall performance for SproutCore apps.

This new version also introduces many API improvements and additions to further ease the development of modern large scale web applications. When 1.11.0 final is released in the coming weeks, we will post an in-depth look at the major changes, but until then, the full list can be viewed here: https://github.com/sproutcore/sproutcore/blob/master/CHANGELOG.md

To install SproutCore 1.11.0.rc1 for testing, please upgrade your previous version of SproutCore by running the following:

We will be using your feedback over the next few weeks to finalize 1.11.0, so please be sure to try it out and let us know what you think: Github Issues, #sproutcore on IRC or email to sproutcore@googlegroups.com.

Since there has been so much activity in SproutCore lately in the run up to 1.11.0, I thought it would be best to start a more regular update on the changes occurring in master. While we occasionally highlight a specific new feature in depth through a “Dispatches from the Edge” post, there are actually hundreds of small, yet interesting, changes occurring weekly that aren’t large enough to warrant their own post. It’s my hope to capture these changes in a weekly to bi-weekly developer update. So let’s begin with the last couple of weeks (Note: no changes are final).

If you own an Apple Magic Mouse, you may have found some web apps difficult to use. A notable public example of this problem was in the Google Maps app. When you released your finger after dragging the map around, the extra mouse wheel events that were sent as your finger was lifted caused the map to zoom in and out rapidly. Now I believe Google has fixed that problem with their app and we have as well for SproutCore’s SC.SliderView and SC.ScrollView, both of which use mouse wheel events. To prevent the extra mouse wheel events that can occur on click or release from triggering the control, we ignore any mouse wheel events that fire while the mouse is pressed up until 250ms after the mouse up event. Depending on how adept your users are with their mice clicks, the result may be a huge improvement or barely perceptible, but even as small a change as it is to prevent scrolling jiggle on mouse click, it’s just one more brick in the incredible user experience wall that we’re trying to build with SproutCore.

We’ve been working diligently on SC.ScrollView performance (more on that later), but in the process we’ve implemented some other performance improvements.

We fixed a problem with excessive layout updates for certain types of views. If a view used viewDidResize to check for size changes and then make further adjustments to its position, the adjustments to its position would have appeared as further changes to its size. In particular, SC.PickerPane suffered from this, since it re-positions itself whenever its size changes.

Speaking of SC.PickerPane, this one got a performance scrub down. You may not have been aware, but SC.PickerPane now has some special code enabling it to appear within scrollable content and move correctly when the content scrolls. It’s a really nice advanced feature, but there were a couple of issues hampering the performance of it. The first was that the scroll view observers were too greedy observing offsets of the scroll view for changes and repositioning on each change. What this meant was that an SC.PickerPane could reposition itself up to 6 times in a single run loop as the content of the scroll view changed. Instead, the proper pattern for observing multiple properties (or noisy properties) is to filter the input through an invokeX (i.e. so even though 6 calls to the observer function may occur, we only call positionPane once). Additionally, we no longer observe the offsets if the scroll view can’t even scroll and finally, there is a bug fix in there too. When the picker’s anchor gets moved on its own, we ensure that the anchor is in its new position before we re-position.

One of the most important classes within SproutCore has been sped up a bit too. SC.State had two observes helper functions used to be notified when its enteredSubstates and currentSubstates arrays changed. Since these arrays are modified by the owner statechart, the observers needed to be chained enumerable observers. However, this resulted in slower object initialization for each state object and excess observer firing as the entered and current substates change. Instead, we simply notify the target state directly each time that the owning statechart makes a change to its enteredSubstates and currentSubstates. This one has has a couple benchmarks to site:

While a reduction of 30ms in a, generally once run, method isn’t much to write home about, we are relentless in shaving every possible millisecond that we can. More notably, we’ve recently made some serious performance improvements to the core SC methods: SC.mixin, SC.supplement as well as to SC.Function.enhance. SC.mixin and SC.supplement iterated the arguments object to insert a boolean flag to pass to a private function that then iterated the arguments again in order to remove the flag argument, which is totally unnecessary. Instead, SC.mixin and SC.supplement iterate the arguments once and pass the new Array to the private function, removing the need for a second iteration.

Also,SC.RenderContext’s setStyle method was updated so that it could be optimized for V8 as well.

This one will actually get its own blog post. For now, I just wanted to mention that these views have seen massive refactoring. The purpose of the changes has been to simplify the logic, which had gotten fairly unruly, but more importantly to grind and grind on the little details so that scrolling and scaling should feel as good and as natural as possible. We’ll post an in-depth on SC.ScrollView in the next couple weeks.

We fixed SC.MenuPane automatic resizing to fit within the window. The positioning code used in SC.PickerPane failed to apply adjustments to the width or height of the pane, which had been calculated in order to fit long menus within the window. This included improving the menu positioning code to respect the value of windowPadding and fixing a problem where the items array was not observed for content changes if it was set on create.

We removed an unnecessary layout change in createChildViews, which also meant that creating a menu pane as a singleton (i.e. with no run loop) would throw invokeOnce warnings.

WARNING We removed the SC.MenuPane.VERTICAL_OFFSET property. SC.PickerPane already has a provision for offsetting panes from the window’s edges, windowPadding, and that is the property that is being used now.

Finally, there are always a large number of little changes. Here are some from the last few weeks.

I apologize that this post is quite long, if it actually included all the work in the scroll and scroller views it would be three times longer, but as you can see, there is a lot going on. I hope to keep these posts much shorter from now on by keeping them more regular.

We have good news for anyone using the experimental polymorphism framework from within SproutCore. You’ll be glad to know that it has now made its way into the official datastore framework as part of SC.Record. If you have been using this framework, you’ll be even more glad to learn that polymorphic records are now significantly faster and more memory efficient. As well, this change includes a critical bug fix that resulted in polymorphic records getting mismatched when their id was changed.

For those interested in what this change means, here’s how it works. First, if you’re not familiar with polymorphism, it’s similar to inheritance, but differs in that polymorphic subclasses share a common ”identity”. Here’s what that means with respect to the data model. In typical inheritance, the subclasses inherit the traits (attributes) of their superclass, but they can’t stand-in for that superclass (i.e. their identity or type is unique). In polymorphic inheritance, the subclass still inherits the traits of the superclass, but is now also considered to be the “same” type as the superclass. This means that when you query for records of a polymorphic super type, you’ll also receive records of all the polymorphic sub types.

So how do we use it in SproutCore? It’s simply a matter of adding the isPolymorphic property to a record class and extending it. Let’s look at an example from the SC.Record documentation that will hopefully clear up any remaining confusion on how polymorphism works.

SC.ListView has a new trick in the upcoming v1.11 (available now on latest master): a new layoutDirection property which can turn it from vertical to horizontal with one line of code. It’s a long-requested feature, and now it’s as easy as layoutDirection: SC.LAYOUT_HORIZONTAL.

In support of this brave new world, a number of list view properties have new names, replacing all now-outdated mentions of “height” with “size”: rowHeight is now rowSize, et cetera. The new API is backwards-compatible with the old one, with the usual crew of helpful developer warnings to ease your project over without breaking it. 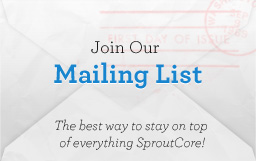